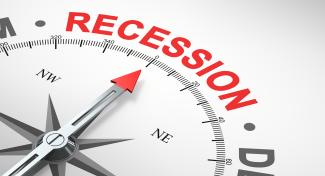 Are We Headed for Recession

Are we heading for recession?

According to a recent Quinnipiac University Poll, 85% of Americans seem to think so.[ii]

I agree with them, and from the recent conversations I’ve had with clients, they do too.

Larry Summers, former Treasury Secretary and director of National Economic Council, recently observed “The discouraging fact is that, when you have unemployment below 4% and inflation above 4%, recession always follows within two years.”[iii]

Robert Shiller, Sterling Professor at Yale University, and Gary Shilling, famed money manager and Forbes columnist also are on the record that they believe we will be entering recession soon.

I track many economic indicators each month to keep tabs on how the economy is doing.  My composite recession indicator issued a recession warning on April 29th.

Here are three reasons why I think we’re heading for recession.

#1:  Leading Economic Indicators, such as housing permits and weekly hours worked, always turn down prior to recession.  As you can see, they are definitely doing that now.  Recessions are the gray vertical lines.

#2: Oil, often spikes before recessions.  As you well know, oil has been driving up lately.  I also want to point out that once the recession gets underway, oil prices decline.

#3:  The stock market itself is a great recession indicator, on average peaking 4-5 months in advance of the economy, according to Jeremy Siegel in his excellent book Stocks for the Long Run.  Here’s a chart of the SPDR S&P 500 ETF:

The interesting thing to me, an investment nerd, is that the investment markets don’t seem to share the same concern.  Don’t get me wrong, investors are concerned.  But it seems the concern is about inflation and the Fed raising rates, not recession right now.

Here’s why.  The bond market is going down.  Check out iShares 7 to 10-year Treasury Bond ETF below.  When investors get concerned about recession, they begin piling into bonds, and that is clearly not happening yet.  I would expect that to change before the recession is upon us, or shortly thereafter.

Some may think that the reason bonds are going down is because investors are losing faith in the United States Government’s ability to repay her debts.  That isn’t happening in my view yet.

Here’s a chart of Invesco’s US Dollar ETF:

Clearly, investors are piling into dollars right now, which indicates confidence in our currency.

The money isn’t going to stocks, bonds, real estate, or cryptocurrencies.  My hunch is they are staying in cash, or buying commodities and energy stocks.

I believe the focus will eventually shift from inflation and rising interest rates to recession.